The original 50-year Skagit project license expired in 1977 and the City of Seattle applied to the Federal Energy Regulatory Commission (FERC) for a new operating license. 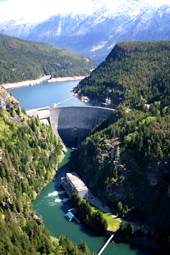 Twelve entities, including federal and state agencies, Native American tribes, and environmental groups, filed motions with FERC to intervene in the relicensing procedure. Between 1977 and 1989 City Light worked collaboratively with the Interveners to carry out scientific research on the project's impacts. As a result, City Light built up a large environmental database. More is known about the ecology of the Skagit River than any other river in Washington State. This information provides the basis for a scientifically sound, effective mitigation program.

The Settlement Agreements describe the mitigation jointly agreed upon by City Light and the Interveners. Actions taken to implement the settlement agreement are summarized below:


The Skagit operating license expires on april 30th 2025. Find information related to the relicensing of the Skagit Hydroelectric Project.